GSoC Reunion Summit 2014 from my point of view

I was very lucky to be provided with wonderful opportunity of attending GSoC 2014 Reunion Summit as a Drupal delegate. The event was celebration of ten-year anniversary of Google Summer of Code program. It was an amazing event and also my first trip to the states. I had very high expectations from this event and was very excited to attend it, and I was not disappointed after I did. I totally enjoyed my time there and will try to describe my experiences in more detail below. I’ll stick to a chronological order to describe my experiences since that makes it easier for me to recollect all the things that were going on.

The long flight to San Francisco

My journey to the states started when I boarded flight to London from Hyderabad airport on the morning of 23rd (according to local time). It was a long 10 hour journey but I was accompanied by two of my friends who were also coming for the Reunion summit. From London, we had another 10 hour flight to San Francisco. While waiting at the London airport, we saw a couple of guys walking around in GSoC t-shirts. Without missing a chance to socialize, we asked them if they were also going to attend the Reunion and obviously the answer was yes. Slowly, we realized that the entire boarding area was flocked with nerds from all around the world. We boarded the flight after few introductions and it was a pleasant journey thereafter.

The plane landed at the SFO airport late in the evening and we checked in at the Marriott an hour later. I was a bit of late to check in and apparently they ran out of normal rooms at that point of time so they upgraded me to a Deluxe room at no extra cost which was pretty cool. At this point, I was pretty tired to do anything else apart from crashing on the bed but strong desire to see Angie Byron (webchick) ASAP kept me awake. Finally I met Angie who was in a ‘Big Blue Drupal’ t-shirt. It was really great to finally see her in person. It was interesting to meet another fellow Drupaler Dhruv Baldawa(dhruvbaldawa) there.

There was also a dinner planned that night, but by the time I got there only dessert counters were still open. But who cares whether or not other counters are open anyway when desserts are still being served. After that it was time for some more socializing. Meeting folks from various different projects such as Libre Office, Sahana, OSGeo, PHPMyAdmin among others was also very interesting. Our topics of discussion ranged from organizational structure of large organizations to heavy metal music so it was quite a bit of fun. After some time, I slowly disappeared from the Grand Ballroom of Marriott and went to sleep. 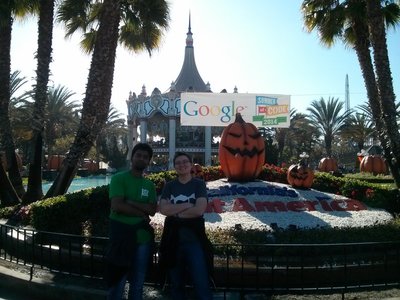 Just after the breakfast, we boarded shuttles to the Great America amusement park. While in other amusement parks, the problem is the long queue for the rides, the major problem there was to identify whether or not a ride was open that day. This was because of the fact that the park was closed for common public that day. Yes, you heard me right - Google had booked the entire park that for the Reunion attendees which was pretty awesome. That also meant free access to the Arcade and we all got a chance to show off their skills on the Pacman and other games. After having a satisfying lunch, we headed back to the hotel.

After a downtime of a few hours, it was time for the Dinner Reception. The schedule said that we had to be in dressy outfits and of course everyone had a different interpretation of what dressy meant. For some, it meant not wearing shorts and beach t-shirts and for some, it meant wearing their Halloween costumes. The reception was held at the Tech Museum which had a bunch of geeky exhibits including an 'Earthquake Room’.

Google had organized few sessions and the speakers included Chris DiBona, Alfred Spector, Peter Norvig, Dirk Hohndel and drumroll Linus Torvalds. Since, the speakers were not announced beforehand, it was a big surprise to see Linus there. Everyone practically stood in line to get a picture with him. Though I didn’t managed to get a selfie with him, it was still awesome to see him.

Me and Angie had also proposed a session titled: 'Making your project more approachable to new contributors: Discuss strategies regarding how to help new contributors get started with your open source project’ (which by the way was the most voted session on the Moderator forum for sessions). We tried to make our session more like a discussion instead of we just walking though some slides. To get the discussion started, we talked about some of the strategies we use at Drupal to help new contributors. And then, we asked others to discuss any problems or ideas they come across working on their open source projects. Since I was a recent newcomer to Drupal and Angie was an experienced Drupalista, we could present the both sides, i.e mentor and metee. It was a pretty interesting discussion overall and I got to know about various new techniques. Slides/Notes from our session: https://docs.google.com/presentation/d/1QAhm2f3x7ub-Cz61Hdu79Fs3DjNpro1KpDpQsyncBRI

Drupal and Plone get together

Just after our session, someone asked me “Are you cs_shadow” and I was like “…..Yes!?”. Then I came to know that he was David Bain (@pigeonflight), a rockstar Plone developer. He was a friend of Varun Baker (@varunity) who had specially asked him to get a pic with me and Angie. That was a very sweet gesture on his part and here’s that pic with all of us smiling: 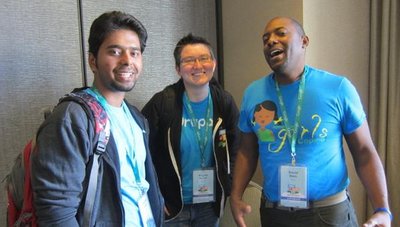 After our session, I went attended some other sessions such as best practices for open source documentation, codejam session and feedback session for Melange and GSoC.

The OSPO team had put up t-shirts from all the 10 years of GSoC on display which was pretty cool. We all were discussing in front of it that who has how many of those. I pointed out that I had that one, Angie said she has 'that, that and that one’. Then someone came and said that he had 8 of those and we all went Wow. Here’s a pic of the wall: 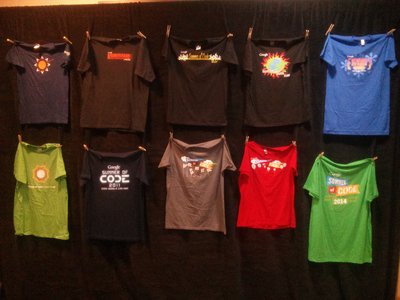 That morning, we went to visit the Googleplex and had a semi-guided tour of the campus including the Android lawn statues. When we came back to the hotel, there were a few more sessions. But the the most interesting session was the 'Lightning Talks’ where basically people had to showcase an awesome project in just a few minutes.

After the lunch, it was time for the closing session by Carol, which was followed by a much deserved standing ovation to the entire OSPO team, including Carol, Stephanie, Cat and others. After the session, they gave all of us a Google Cardboard which was very cool.

Quickly after that, we had to catch our shuttles, so I said goodbye to Angie, who had to catch a plane. And since I planned to stay around for a few more days, I went off to my hotel in San Francisco.

The Summit was officially over but I had planned to stay around for a little more so that morning I went to visit the Golden Gate Bridge area. I got a chance to meet Matthew Lechlieder (@Slurpee) and it was pretty nice to finally meet him person after those long IRC chats. Here’s a pic of me and Slurpee at the Fishermen’s Wharf: 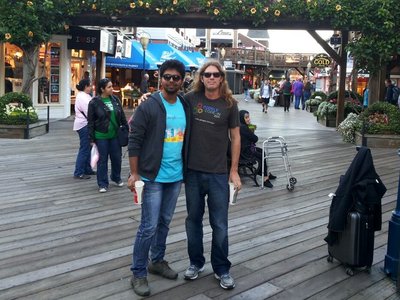 To sum it all up, it was an awesome trip to the States and a big thanks to everyone who provided me this wonderful opportunity.

My views on life, universe and everything.